I know it's July,
But this is flowering now. 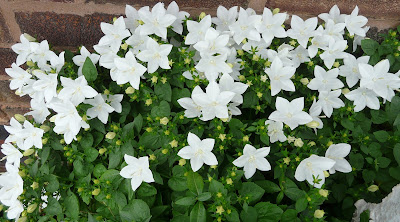 This is Campanula isophylla, commonly known as Star Of Bethlehem. Just to confuse things, Star Of Bethlehem is also the common name of a bulb, Ornithogalum. So on this occasion, the Latin name wins.

I was given this plant many years ago by a friend of mine. I planted it in a brick container under the eaves of the house roof. As a result, it doesn't get much rain, even in winter, and I never, ever water it. Seems to like it though. It has thrived there, never damaged by the severest of winters, despite not being fully hardy. I have tried growing it in other situations, but it has not survived the winters elsewhere.

And what about the weather then. What a heatwave. We didn't see that one coming, did we?  Oh, hang on. Way back on the 1st of April, I think I mentioned it. And you all thought it was an April Fool joke, didn't you ?

At the time, I was writing about Mother Nature always paying her debts. And have you noticed the rain, or should I say lack of it. Whilst the media dwells on the heat, no mention of the fact that we've had very little rain since the start of the year. 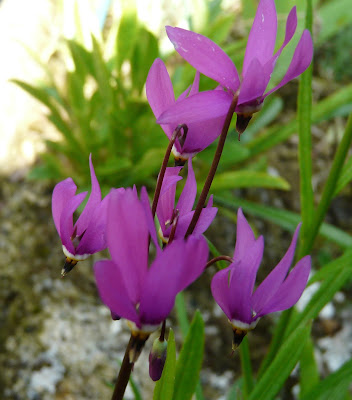 This is a Dodecatheon, flowering a few weeks ago. I've had this plant for quite a few years now. It always produces a flower spike, and every year the snails eat it. But not this year, thanks to the lack of rain, the snails left it alone. 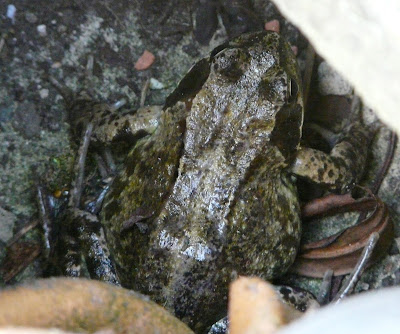 Despite the lack of rain, pleased to report that these guys are still in the garden. But on a sadder note, the garden is almost devoid of birds. For the first time in many years, I have had to cease feeding them. Two magpies, who had built a nest in the hawthorn tree, became quite aggressive to the resident blackbirds in the garden. I decided that I didn't want to encourage birds to come and feed, in case the magpies attacked them, or worst still, followed them back to their nests. The magpies produced two youngsters, the only nest in the garden this year.

Crystal
A gentle soul who loves to grow things, and shares the garden with all who live in it

This Weather Widget is provided by the Met Office